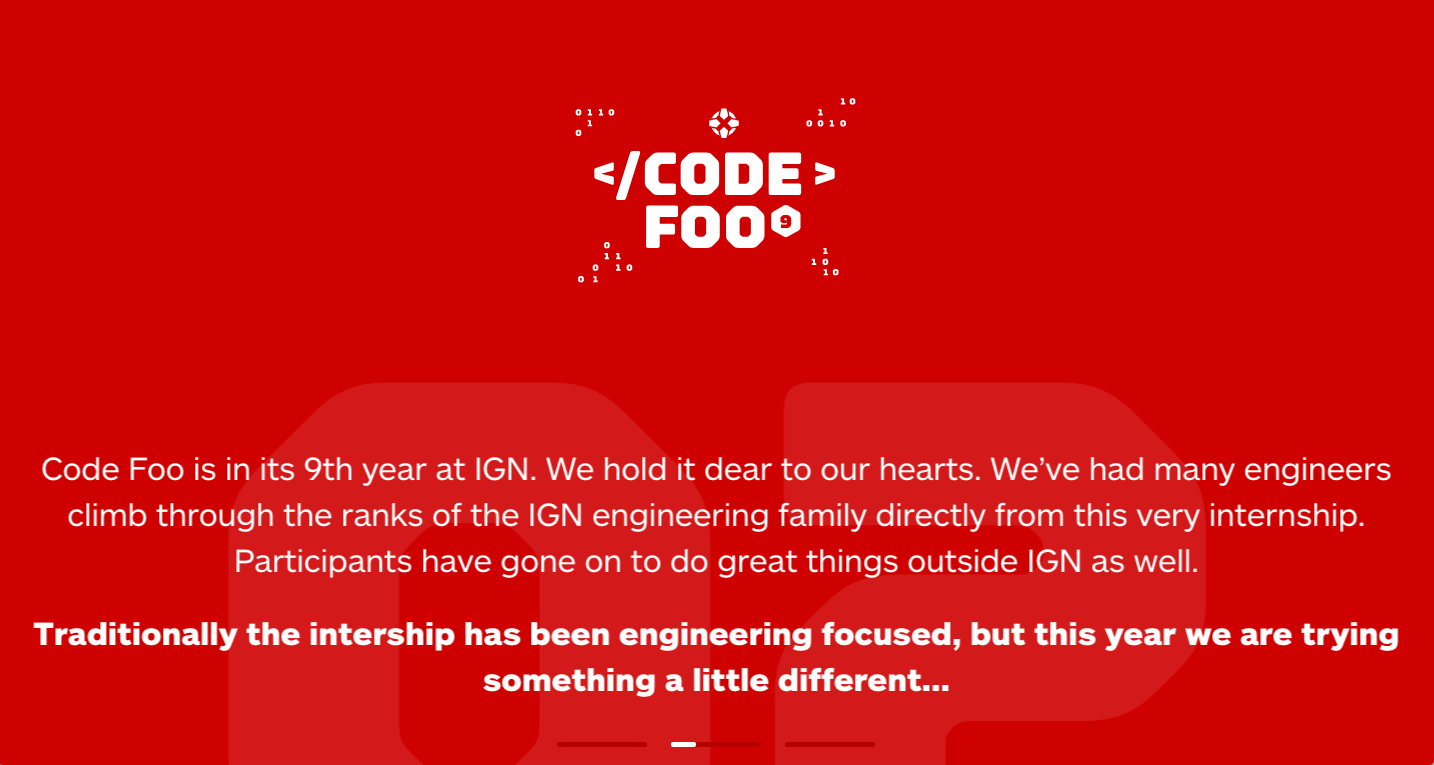 Hello, guys, This is my first all English article.

The reason why I do so is because i am applying IGN Code Foo for my summer internship.

Here is the application link they asked to fill out Code Foo 9 before submission.

In the google forms, one of the questions is

“Introduce yourself, explain your connection to IGN, and tell us why we should pick you to

and also shown in small letters,

“Show your enthusiasm and passion for IGN in the form of a written document, YouTube/Vimeo

video, audio track, or whatever format you feel most comfortable with. You can type an

explanation here, type a URL here, or use the file uploader below to submit materials.”

it would be like to apply for an internship in America.

My answers are as follows,

Hi, Im Ming Hui Lin. I am currently an MFA candidate in Visual Communication Design at

Rochester Institute of Technology. I love to travel and had already been to 15 countries

since 2013. With a burning desire to document everything I see, I started a blog to record

all my travel stories at 2014 and YouTube channel at 2016. Those experience make me gain

simplified to my viewers.

When I got my first computer, I started playing Bnb, which is a bomberman-like game

that went viral in Taiwan. After that I got my NDS and played Cooking Mama and Mario

Kart. But the very first connection I really had with the gaming world was when I was

League of Legends championship and Hearthstone gatherings. I was not aware of how

gaming can really be impactful, but the second I stepped foot on the scene, it was

mind-blowing. I realized how gaming had grown nowadays, and can really influence the world.

story, user flow, or sketch, even though these important research may be the most boring

part for some designers. What’s more interesting is that when I mentioned this opportunity

to my boyfriend, who is a moderate gamer who plays mostly on his PC, Switch, and phone,

about code foo, he is really excited about this opportunity and told me that the gaming

industry is vast and full of wonders. He also looks forward to this new app release so that

he can easily search for new games and reach game news systematically, if it were to come

People all know that IGN provides news, reviews, and walkthroughs for games, but IGN also

provides information about movies, dramas, comic news, and etc. That is why I believe I will

excel at the job, since I majored in Public Relation and Advertising in college. When I worked

on campaigns I used to do both preliminary research and review of my work afterwards. Even

though my major back then was not entirely connected to UI/UX, I believe that these two

different disciplines share similar traits, and since I now possess knowledge in marketing,

design, and technology I can bring new perspectives from different angles to the team.

If I were to work at IGN, I expect myself to at least possess basic domain knowledge,

because that is what a marketer should have. With experience as an intern within a

I can familiarize myself with possible tasks and communicate and work cross functionally.

I am really interested in being part of the program. I like the way IGN searches for fresh

talents in a different way. I hope that I have the honor to work with the brightest and join

the big family in the Summer.

Questions You may Want to Ask：

IGN was having a very difficult time trying to find developers the traditional resume way.

programming at age 13.4, said Roy Bahat, President of IGN. After cranking through the same

resume churn, Bahat realized his company was talking to the same college grads and pHDs

everyone else was talking to. Why should we care about their higher education?

If they can code and love what we do, then that's what they want, Bahat said. In response to

their great coder awakening, IGN created "Code Foo." It's a challenge to any programmer

who wants to work for IGN. They submit their code and submit a statement of passion for IGN.

If you complete the challenge you're hired to get six weeks of training working on projects.

If they make the bar, they get a job. (Source: Dice)

Roy Bahat, President of IGN, has been condicting this program for nine years, but only had

engireering postions. This year they opened positions for Design and Product, so I plucked up

my courage and applied for the opportunity to become the first batch of designers from Code Foo.

If you have any other questions that I didn't mention above, feel free to contact me on my